I found this on FaceBook, and it inspired me (after a fashion). 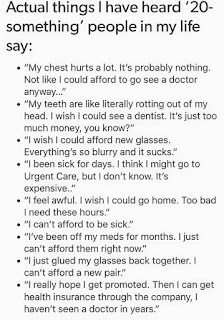 Several years back a good friend of mine mentioned he had a toothache that was driving him out of his mind. He couldn't sleep because of the pain, and he didn't have money for a dentist. When I mentioned this to my mother, her immediate response was, "Well, we can fix that. Let's go to the bank."

The cost? $2,000 to relieve my friend's suffering. It was the best money Mom ever spent that year. But then, ObamaCare was supposed to fix all this, right?

In my own not so humble opinion, there's something inherently wrong with a system that will cheerfully spend billions on foreign aid to nations that harbor terrorists, college education for the terminally stupid, and free food and housing for life for those who refuse to work for a living, yet won't provide a dime to someone who works long, hard, hours, who is honest and a good citizen, but who is suffering terrible pain that can easily be treated and put right.

Email ThisBlogThis!Share to TwitterShare to FacebookShare to Pinterest
Labels: Complaints