The word shrove comes from the word shrive, which (if you believe the OED) means to impose penance upon (a person); hence, to administer absolution to; to hear the confession of.
In other, more civilized parts of the world, today is Fat Tuesday.  Today we eat, drink, and make gluttonous khazers of ourselves, for tomorrow is Ash Wednesday, which signals the beginning of recovery week for all those of you who party hardy on Tuesday.

As I said, Wednesday is the beginning of Lent, and we all turn over the new leaf of austerity. But let's not think about that; it's unnatural.  Instead, observe party time, for tomorrow may never come.

Party Central for Mardi Gras is Bourbon Street in New Orleans, Louisiana, otherwise known as The Big Easy.  The truth (being somewhat less appealing than fiction) is that most of the New Orleans locals leave town during the Mardi Gras season.  Those that stay are working and making a nice income off the tourists, all of whom are busy doing the best they can to give themselves alcohol poisoning.  The crowds are massive, and the press of people is the only holding some of these party patrons upright.

By the way, if you're ever stuck in a crowd on Bourbon Street and want to get out, the best thing to do is to bend over sharply and make retching noises.  People around you will believe that you exceeded your drink limit and will quickly back away, then will give you a tunnel to exit.

As for me, I've never been to Mardi Gras and have no intention of ever going.  Mardi Gras is the number one original worst amateur night anywhere, ever.  It incorporates tourists, money, and copious amounts of booze.  Put all these together and agitate them; see what happens.  If you don't believe me, just ask the New Orleans Police Department officers who get stuck working the crowd.  They can tell you some real horror stories.

For a safe and sane celebration, go out and have some pancakes for lunch, then indulge yourself in your favorite dinner and top it off with a hot fudge sundae.  There you go - Fat Tuesday.

I wonder if a rock musician ever really retires?  I tend to think they don't - but the sets get a little shorter.

Noteworthy rock drummer and sometime author John B. Meilink is officially retiring, and as such a retirement party is mandatory.  So it's off to the underground club in Temperance, Michigan for an evening of rock music and friends who are getting older.

The name says it all.  Old Grand-Dad is not just for drinking; it's also proof against cold weather, bad tempered women and snake bite.

I can't remember what the band was playing here, but I was trying to get the drummer in motion when it was apparent he was enjoying himself.

I don't know why the band members crowded around to the left, but I think it had something to do with the P.A. system, which was not behaving as expected.

I finally got a decent picture of the elusive John B. making the wood fly.  You're looking good, old man!

As usual, I had a great time at the club, and as usual, most everyone who is laid back and likes rock music is invited.  I'm looking forward to the next session - as usual.
Posted by WL Emery at 3:08 PM No comments:

I've been worried over Zeus the cat.  He's getting on there in years (16 or 17, we think) and he hasn't been eating lately.  I took him over to the Hamilton Road Animal Hospital, and Dr. Carol fixed him up with an uncomfortable examination and some medicine, including an appetite stimulant.  You see the results below.

You will note that Zeus prefers his water in a highball glass.  Truly, I don't know why, but he goes to the glass in preference of anything else.  He also dived into the new food I bought for him.  I bought several brands at the store on the advice of Dr. Carol, who said that getting the little monster to eat was more a matter of trial and error than anything else.


Zeus was so enthusiastic that he is now in violation of the Feline Order of the Day, Section 1, Number 3, part C: Muzzle, Untidy in.  He refused to allow me to clean him up, so I left him to his own devices.

More as a memo to myself than anything else, here is His Majesty's preferred brand of cat food.  Chow time!

I found this today while procrastinating.  This is Canada's answer to the international border crises, and it's a good one. 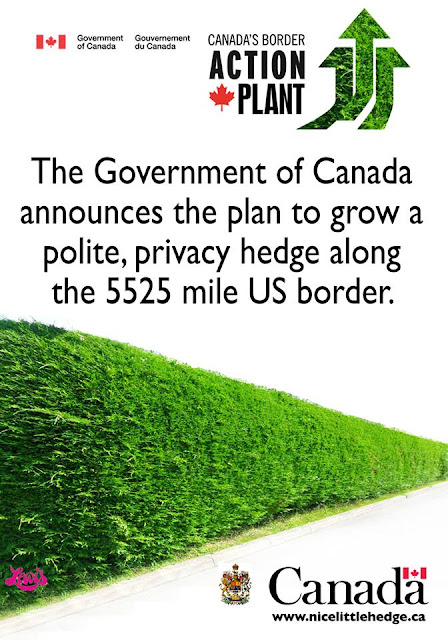 I understand the U.S. and Canadian governments are both looking for experienced hedge trimmers, so I volunteered Glen Filthie over at Filthie's Thunderbox. No need to thank me.
Posted by WL Emery at 2:17 PM 1 comment:

This is my living room. The feline with his muzzle in my water glass is Zeus.

Zeus has his own water, which is perfectly good.  Why is he demanding mine?

Now I know why my water tastes funny. 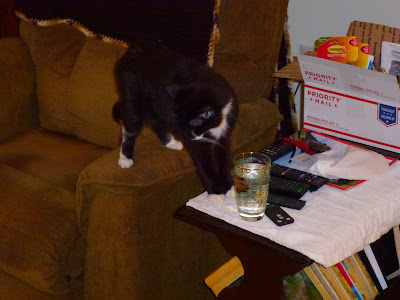 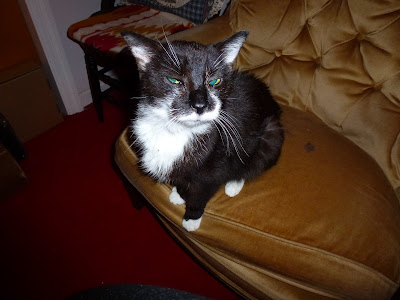 Oh well.  I got myself another glass from the kitchen and kept it out of his reach.
Posted by WL Emery at 11:57 PM 1 comment:

I found this little gem on Facebook, that bastion of free speech for moonbats everywhere.  Check the flag and the caption.

The reality is a bit different.  From the article Lps Sends Statement Regarding Flag Placement at North Star High School:


Lincoln Public Schools was made aware Wednesday of an incident that happened in a Spanish language classroom at Lincoln North Star High School. There are flags of many nations hanging in the classroom, and one student hung a Mexican flag on the same flag pole as the American flag.
The classroom teacher appropriately used the incident as an opportunity for a teachable moment to lead a discussion on respecting the American flag, proper flag etiquette and patriotism, and removed the Mexican flag. The school principal had conversations with the students and staff involved, and people had an opportunity to discuss the issue. These were all positive experiences; these are life lessons that stick with students.

Note that it was a student who hung the flag, and the instructor corrected it.  Now just try and get the real explanation to fly in the face of the blatant lie that is already making the viral rounds.