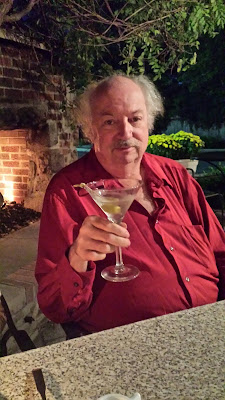 I just got back from Memphis, TN, where I spent a week at my brother's house - along with his wife Kim, son Wayne, five dogs and three cats.  It was an eventful trip, which I'll write about later one.

You see me here relaxing at Ciao! Ristorante in Sylvania, about two hours after I got off a flight from United Airline, in which 87 people were crammed into a space suitable for 23 well-behaved grade school children.  I had to put up with the usual misery civilized people encounter on an airplane - sloppy, belligerent drunks, fat people who overlap their own personal space by a gelatinous 17 inches, sick kids who sneeze juicily over everything in a ten foot radius and the sick parents who bring them, the parents who bring infants along, and women who wear too much perfume.  I'm talking someone you can smell six blocks away.  Why do they do this?  Why?  I've never found an answer.

The only people I feel genuinely sorry for are the infants.  They didn't choose this mode of travel, and while going up isn't bad, the descent and resultant ear ache is absolute murder.  The kid doesn't know what's wrong; he only knows it hurts, and his mother won't fix it. Eventually the ears pop and the kid quiets down.

All this aside, my real complaint is with the Memphis, TN Transportation Security Administration.  I'm on time for my flight, which is scheduled to leave at 7:40 AM.  I thought I had plenty of time (1 hour) to get to the gate, but then I encountered the all-important TSA.  They had two aisles open, and people were forced to proceed at a glacial pace. No one was allowed into the little security alley until the previous cow had been thoroughly examined and cleared for our safety.  Which is stable dressing, and has been ever since King George II took up the Federal Scepter and used it to beat the American Sheeple back into line.

I've never heard of the TSA catching a terrorist.  I have read about a few people who got past them, either as a test of security or on purpose.  I vaguely recall some moron with funny tennis shoes getting through, and there was another tilted moonbat who tried to break into the specially reinforced door to the cockpit, and almost made it were it not for the passengers putting a halt to his idiocy and duct taping him into a seat.

So I missed my flight.  This is due entirely to the TSA and their own agenda, which is make the passengers wait.  The fact that this is Memphis, all of the TSA agents are black and I'm white is not lost on me.  Worse, I'm a Damned Yankee.  You know, one of those no-good Northern people whose ancestors fought in the War of Northern Aggression.

When I heard United announce that my flight was in its final boarding stages, and there were still twenty people ahead of me, I got the attention of a TSA officer and briefly explained my predicament.  I asked if there was anything he could do to help me.

"No, I can't do anything." He replied with a grin which screamed passive aggression and payback.

When I finally got to security, they handled me and my carry-on luggage like Stepin Fetchit helping Gaylord aboard the Showboat.