My good friend Pastor Cher passed away last night at the Genesis Healthcare facility in Sylvania, Ohio (on Whiteford Rd, just north of Alexis).  Cher's health had been very poor lately, and she was transferred to Genesis Healthcare from the hospital, where she'd been admitted due to heart problems. 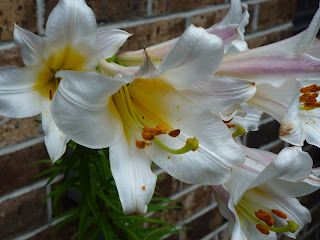 I remember Pastor Cher as a gracious, warm lady who was able to mix easily in any social situation.  She could argue the merits of a Harley Davidson Sportster versus a Fatboy just as easily as she could talk about the quality of the dinner wine, and in the same breath explain Scripture or Christianity to a non-believer - or to a Christian, for all that mattered.  We were blessed to have Pastor Cher as our guest during several holiday dinners, and she was gracious enough to attend my mother's 90th birthday party.

I remember the seating arrangements, as I had to make them.  I deliberately seated Pastor Cher between two of the nicest people I know, so she'd have a pleasant conversation during dinner.  On the other side of the table from Cher I seated Jim 'Slushpump' Derkin (the famous trombone player), noted evangelist Pastor Max McCullough,  and my Aunt, Ann Braunschweiger.

As we finished the main course, my Aunt Ann revealed that she and Ned have spent some time attending a series of open house events at a local mosque, during which the Imam relates the principles of Islam and the similarities between the Muslims and the Christians.  Pastor Max was too gracious to say much and probably didn't want to interrupt a good declamation.  Pastor Cher, however, was willing to derail the train.

"You know, we Christians have more in common with Muslims than you think," Ann said emphatically.

There was a long silence, during which several people were trying to decide if applause would be appropriate.

"Well, yes, except for Jesus,"  Ann reluctantly conceded, then wisely changed the subject.
"Have you been to Fifth-Third field to see the Mud Hens play?"

It was a great party, and Pastor Cher certainly enjoyed herself.  She came to my mother's funeral service and spoke eloquently about Mom, which I appreciated.  Her presence there was a comfort to me.  I shall miss her, but there isn't a doubt in my mind that Pastor Cher Clay is in Heaven, having a great time and meeting all the people that were waiting for her there.
Posted by WL Emery at 11:49 AM