Tonight I made dinner for me and Ellen, which is something she always enjoys. After browsing around a little, I decided on shrimp etouffee. The recipe called for 14 ounces of chicken broth, and I immediately went into my happy dance.  I had planned ahead, you see.  And no, I'm not talking about buying two bottles of gin instead of just one.  Some time ago, I spent most of a day making a large quantity of chicken stock, and I froze most of it in two cup quantities.

I put the frozen solid baggie of chicken broth on the counter to thaw, then I went to the store.  When I returned, I noted that everything I put down on the counter came away wet.  What's this deal?  The freezer bag has a hole in it, and my chicken stock is leaking all over the counter.

I put the leaky bag inside a larger bag and wondered just where I went wrong. 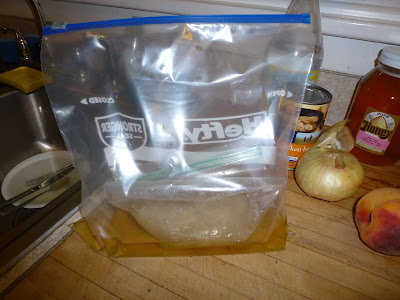 Then I decided to go for a bike ride.  It was a nice day, the exercise is good for me, and I think it helps my mental outlook.  So because I'm a really cool bicyclist and all that, I'm going to add a little air to my tires before I take off.  I hook up the good old bicycle pump and realize the connector won't fit the valve stem on my bike.  Well, no problem.  I have another pump, a foot operated model.  I hook that one up with no problem and start pumping away.  Air is really whooshing around, but there doesn't seem to be much resistance to the foot pedal.  I pump for a while, and it doesn't feel right.  I check the tire.

It turns out that there's a hole in the tire pump. 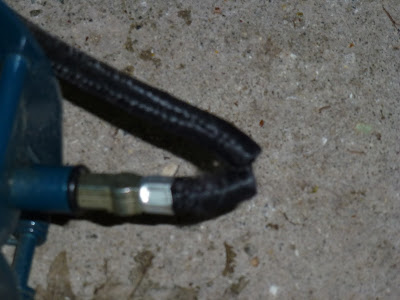 Discouraged but determined, I put the bike rack on my car, strap the bike on the rack and head over to The Bike Route, where I get my tires inflated and buy a new tire pump for about $40.  Well, it was on sale and it's a good pump.

I've got a lot of brush that has to come down around the house, so I got out the old chain saw.  It wouldn't start.  Wouldn't even pop.  I took it over to Janney's Service Center, where I spent $40 to have the mechanic tell me that the chainsaw was stored with fuel in the tank, the fuel evaporated and the residue is clogging up everything, especially the carburetor.  Since it's an old chainsaw, they probably can't get parts for it, and even if they could the repair will start at $120.  That's just for openers, see.  Start at an additional $120, on top of the $40 that I just burned up.  The mechanic won't run carburetor cleaner through it.  I gather they don't do that anymore.

I picked up my saw and left.  I don't know quite why, but this whole business left a sour taste in my mouth.  I feel like I got hosed somehow, I just don't know quite how.  I don't expect the man to work for nothing, but to drop $40 just to find out it's going to cost a lot more to fix the chainsaw, and then the fix might not work seems to be a bit much.

I called my neighbor Margie and asked if she had a chainsaw I could borrow.  As it happens, she did, but she didn't have any bar oil for it.  No problem, I'll go out and get some at The Andersons. I must have walked the length of the store three times before I found the bar oil.  All I can say is that I was following a customer service guy, and he was in worse physical shape than I'm in and he couldn't find it either.  Well, I finally found the oil, bought a giant size can of it and went home.

I like chainsawing stuff up.  It gets rid of a lot of frustrations... until the saw gets jammed in a tree limb and I have to dig out a dull trimming saw and work for a solid hour getting it unjammed.

I worked until my arms gave out, then I quit.  Evidently the chainsaw decided to quite too, because it wouldn't start the next day.  Letting it sit and stew overnight didn't improve its attitude, because it refused to start again today.

So me, not being too bright, offered to take it over to Janney's and let them work on it.  I'm sure I'm going to get hosed again, but since the cursed thing was working earlier, the fix can't be all that bad.  So I've got that to look forward to.

But dinner was a success.  I've never made etouffee, although I've got several recipes for it, including one given to me by a professional chef from Wisconsin, which came with explicit instructions which emphasize keeping a fire extinguisher close at hand.  And yes, the man was serious.  Very serious.

I didn't use the recipe I got in Wisconsin, but the one I used was a civilian version of the same thing, and it turned out great.  In particular, the recipe called for 14 ounces of chicken broth, and I discovered that only two ounces had leaked out of the bag, leaving exactly 14 ounces behind.  Divine intervention, I think, played a big part in this one.

I think I'll have a brandy and hit the sack.  Tomorrow starts a new week and a trip Memphis, where I'll enjoy barbecue and Beale Street.  Here's how!